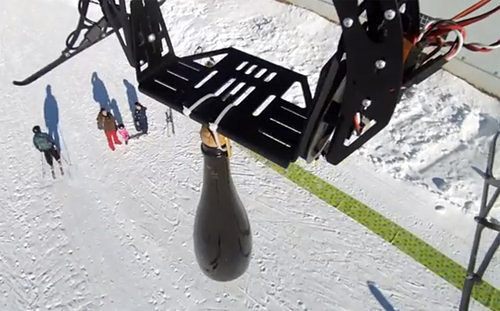 Seen in US magazine EATER, in France with MELTY, in Italy….The international social media buzz of the week regarding wine and Champagne will undoubtedly be this video where you can easily recognize a MultiVintage bottle transported at 2200 meters altitude by a drone. But going where, you may ask? This drone delivers a MultiVintage cuvee to thirsty apres-skiers seating at the highest Champagne bar in the world situated in Verbier, Switzerland.

2013 was a breakthrough year for the Champagne Henri Giraud MultiVintage cuvée and 2014 seems to start strong with this video. In fact, this image of a drone is reminiscent of the famous helicopters that were used for treatments in Champagne and whose complete stop was recently celebrated by Champagne Henri Giraud.

Claude Giraud: “During that evening, we presented an amazing vintage haute couture collection created by Yves Saint Laurent in the 50s. It was a reminder of the times when the world wanted only to talk about parties and when Champagne was rushing into the industrial development . The “blond wine” now thinks about its future in two different ways: those who would like Champagne to be a luxury sparkling wine and those who would like Champagne to become again the great wine of Champagne..”